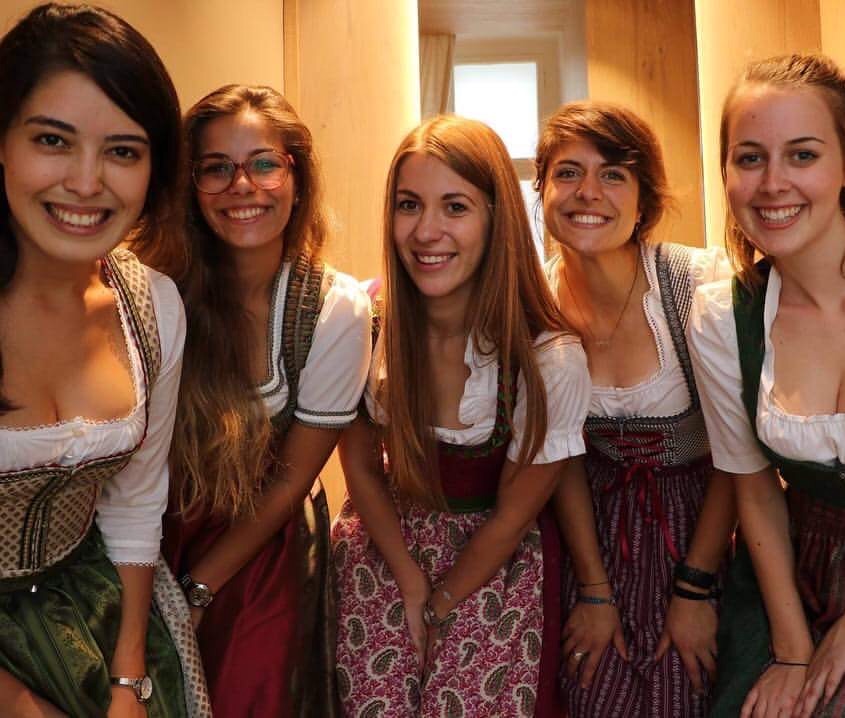 This past weekend hosted a monstrosity of unleashed Austrian culture upon the city of Graz, Austria.

From all corners of Styria, Leiderhosen-clad gents and Dirndl-sporting women grabbed their equally garbed kiddos and piled into the city centers to consume Rosé Sturm fermented wine and currywurst. The city played host to traveling woodworkers, country blacksmiths, home brewers, felt makers, orchestras, accordionist buskers, and traditional dancing troupes. Children were held high upon shoulders amongst the crowd in order to witness the whip-snapping Austrian performers, the smell of roasting chestnuts and the clinking of Austrian beer circumferencing the 70 degree fall air.

I kid you not, boules of doughnut the size of volleyballs. Complex weavings of chocolate nougat braided into puff pastry. Home brewed Schnapps ranging from a throat-ripping pine to a sweet eye-twitching sour cherry. In every little pocket of Graz could traditionally-clad performers be found; dancing the foot stomping Austrian style, plowing away on the accordion, vibrato-ing through the Styria anthems.

This went on for the entire weekend. One, massive, uniformed city-wide party that almost entirely fit every Austrian stereotype I had previously encountered. Leiderhosen and Dirndls? Check. Lots of alcohol in lots of forms? Check. Home baked bread and fresh crafted pastries on every street corner? Absolutely.

It was movingly beautiful and mesmerizing to witness such an outburst of tradition over a proud culture. Parents were going out of their way to culture their offspring in these kinds of traditions, making sure that the generation being reared would successfully continue Austrian culture. Such a display of intense national pride confirms to me that a culture without such traditions wouldn’t effectively work.

Essentially these celebrations are reinforcing the third tier of Maslow’s Hierarchy of Needs, that of love and belonging. To belong to a “bigger picture”. Isolation can destroy confidence and self-efficacy, and cultural isolation can lead to unchecked corruption and selfishness over the lack of formed loyalty to a shared unit.

The same can be seen in the States, too. Thanksgiving, Halloween, April Fool’s Day, Fourth of July, remembering September 11th, 2001…all of these create opportunities for American people to remember the bigger picture to which they belong. To visually experience that the same things they celebrate, mourn, plan and shop for, that they don’t do these things alone.

At a closer level, Emporia State University would be a much different place if sporting events, graduation celebrations, award ceremonies, international banquets, or even floor programs within the resident dorms didn’t exist. And what would you personally be like without your own traditions? Without your own habits, your own tactics for combating stress and long study days?

Parties and celebrations are grand. It’s hard to argue against the fun-aspect of such traditions. But in the relative scheme of a culture, in terms of evolution of survival, they can be seen as unnecessary. Frivolous. Waste of resources. Materialism at its finest.

But what if it’s not waste at all and what if it isn’t just fun? What if it is actually an investment in the long-term group efficacy of a nation? What if importing large amounts of tuition money into the upkeep of the ESU football stadium is not just another frustration leading to high tuition fees? Still more, what if having floor programs and the Union Activities Council isn’t just for kicks and giggles?

I’m realizing that very little in well-established culture contains no meaning. Likewise traditions and festivities are not singular in purpose. The Aufsterien Festival serves multi faceted as both a stress-relieving celebration and a remembrance of cultural Union.

Welcome to the official page for Emporia State University students who are, have been, or plan to study abroad. This is the place where you can blog and document with photos and video about your experiences. Please accept our invitation to blog! By sharing your passion for the world while earning an academic experience, you will ignite the imagination of others and encourage them to follow your footsteps. This site is intended to build a community of students, faculty and alumni who are eager to reflect and share upon their experiences abroad.

There is no need to be scared! All topics count for this site. From your extensive packing list and preparation rituals to your feelings toward a new adventure. From your “a-ha” moments on cultural differences to new friendships and connections. From your new explorations in international cuisine to your classroom experiences. Simply choose the appropriate category to your program/experience (Faculty & Staff Abroad, Faculty-Led Abroad, Semester Abroad, Summer or Short-Term, or Year Abroad) and share away!

To apply for authorship, you must be an ESU student, faculty, or alumni that has studied abroad while attending ESU or plans to study abroad. Current students approved for a study abroad experience will be automatically added via e-mail. E-mail oie1@emporia.edu to see if you are eligible for authorship!

“Not all those who wander are lost.”  J.R.R. Tolkien